I’m at the research stage on a couple of new potential projects. (Sorry to be vague, but they are both too fragile to share any details yet.) For one of them, I’m trying to get a handle on the experience of children during World War II in the United States.

One of the things I’m doing is looking more closely at the things we all think we know about life on the home front. I started with scrap drives, which led me unexpectedly to Little Orphan Annie. 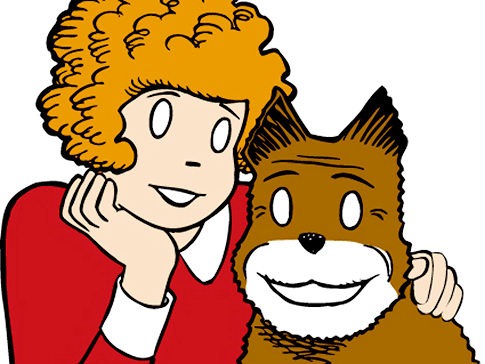 Harold Gray, the creator of Little Orphan Annie, had always found the themes for his comic strips from the headlines. World War II was no different. Daddy Warbucks geared up for war production and joined an unidentifiable army as a 3-star general. Annie and her little dog fought on the home front, foiling Nazi submarine attacks, taking down spy rings, and looking for corruption in local rationing boards.*

Annie most important wartime action, and the one with real life consequences, was the formation of the Junior Commandos: a way for children to contribute to the war effort. “Colonel Annie” explained how the Junior Commandos worked. She had a ledger with the names of everyone in the town. People who gave scrap got a blue mark beside their names. People who hired Junior Commandos to do small jobs, allowing children to earn money to buy war stamps, got a red mark. And people who did not support the Junior Commandos? Colonel Annie’s response was scornful: “If they won’t even try to help when our country needs th’ help o’ everyone? Why that’s easy—for them we use a yellow mark!” (Little Orphan Annie was never a subtle comic strip.)

Children around the country organized Junior Commando chapters and set out to collect scrap materials for the war production effort. Thousands of children participated: by the fall of 1942, the Boston Herald Traveler reported almost 20,000 Junior Commandos were enrolled in the Boston area alone.

The Junior Commandos weren’t the only groups of children that collected scraps. The War Production organized a school-based Junior Army. (Some of those units chose to call themselves Junior Commandos.) Scout troops and churches also pitched in.

It’s not clear how much good scrap collection did in terms of war production. With the exception of kitchen grease, which could be processed into glycerin and used in explosives, the technology for reusing scrap was expensive and inefficient. But there is no doubt that scrap drives were good for moral. As Annie told some neighborhood girls who were giving her a hard time about not having time to play, “Loretta an’ I have something lots more important than playin’. We’re doin’ war work. It’s our war, just as much—or maybe more—than anybody else’s.”

If you have family anecdotes about kids collecting scrap in World War II or know where I can find out more about the Junior Commandos, please let me know.

*This last was not a piece of pure-hearted patriotism. Gray was involved in a flap with his local board over their refusal to allow him extra gasoline coupons. For some reason they did not find agree with his claim that drawing Little Orphan Annie was vital war work and that he needed to travel to collect material. Many readers were not amused by his perceived attack on government war policy and at least one paper refused to run the strip was a result.