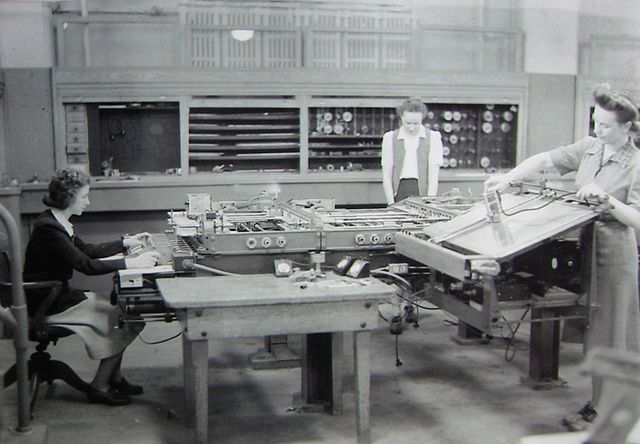 As I’ve mentioned before, I’ve recently been working on a book for 8 to 12 year olds about an incident in WWII. Non-fiction books for kids inevitably include one of my favorite things: sidebars.* Sidebars are a chance to explore an issue that enriches and expands the central text. They also are often a chance for me to learn something new. I did not, however, expect to learn something new about the role of women in World War II, a subject I’ve spent a lot of time on in recent years. Imagine my surprise when I stumbled across a reference to something I’d never heard of:  women calculating the trajectories of missiles for the army. I did a quick literature search to verify that it was true, added a sentence about it to my side bar, and set the question aside for later investigation.  The time for later investigation has come.

Changes in military technology made it possible to fire an artillery shell or drop a bomb from an airplane with greater accuracy than ever before, but that accuracy wasn’t the result of seat of the pants decisions made by soldiers in the field. Accuracy required someone to create complex firing tables that provided soldiers with the correct trajectories, drop points, elevation angles and muzzle velocities. Those tables were location specific. They had to take into account temperature, air density, wind, and target positions. In the days when “computer” referred to a person rather than a machine, those tables were calculated largely by hand.**

When the United States entered the war in 1941, the army needed more computers and needed them quickly. Instead of pulling computers from the limited pool of able-bodied men, they recruited young women with a gift for mathematics, many of them straight out of high-school. They were the heart of the Philadelphia Computing Section (PCS) at the University of Pennsylvania, where they became experts in the science of ballistics calculation.

Six of those women—Betty Jean Jennings, Kathleen McNulty,*** Frances Bilas, Elizabeth Snyder,*** Ruth Lichterman and Marilyn Wescoff—were selected to be part of the group that produced ENIAC, the first electronic computer. Male engineers designed the machine and turned the question of programing it over to the female computers. Their first program was designed to compute a shell trajectory.

The women’s role in the success of ENIAC was discounted almost immediately. Their part in the project was literally left out of the picture: the first public photo of the project, which appeared in the New York Times, was a wide shot that included both men and women working on the machine. When the photograph was reprinted, the women were cropped out. Grrr.

* I first met sidebars in my third-grade social studies text. I remember it clearly: it was nerdy love at first sight.

**They also used a 30-foot-long mechanical calculating machine called a Bush differential analyzer, shown in the picture above.

***Also shown in the picture above/