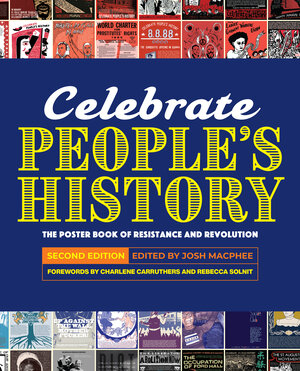 The Celebrate People’s History project began in 1998. In the dead of the night, activist Josh MacPhee, aided by a half-dozen co-conspirators, pasted images of Malcolm X on boarded-up storefronts in Chicago’s West Side. Ten minutes after they started, they had attracted a small crowd of neighborhood residents. Some of them helped put up posters. Others asked for copies.*

Since then, the CPH project has become a multi-voiced conversation about history, social justice and public space in visual form using posters drawn from a wide variety of political traditions. Building on their experience in Chicago, the CPH project has pasted posters on the streets in more than a dozen American cities and exhibited them in more than 100 exhibitions. More important, at least from my perspective, teachers hang copies of the posters in their classroom and use them to kickstart poster-making projects.

The second edition of Celebrate People’s History: The Poster Book of Resistance and Revolution shares more than two hundred posters celebrating and illustrating successful moments in the history of social justice, from the succession of Roman plebes in the fifth century BCE to protests against the Confederate Soldiers Monument in Durham, North Carolina, in 2017. Some of the actions and people they depict were familiar to me: Eugene Debs, the White Rose anti-Nazi resistance group, the Rani of Jhansi (a long-time personal favorite).** Other posters sent me scrambling to learn more. I suspect that is MacPhee’s intention.

In short, it is an entire book of what I call shin-kickers.  This makes me very happy.

The posters are visually stunning and as diverse as the political traditions and historical moments they illustrate. Celebrate People’s History is a feast for the eyes, the mind, and the heart

*Can you blame them? This is a seriously cool poster: 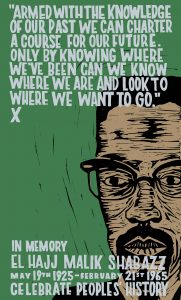 The bare bones of this review appeared previously in Shelf Awareness for Readers.