Elizabeth DeWolfe and I are members of a top secret writing challenge group whose members touch base every day to share the triumphs, the disasters, the joys and frustrations of the writing life. One of the side benefits of the group is learning about what other members are working on. (We are a pretty interesting bunch.) I’ve been fascinated to hear about Elizabeth’s research on nineteenth century hair work., and I’m pleased to have the chance to share it with the Marginalia.  I’ve always though of hair work as vaguely creepy. Elizabeth changed my mind in the piece below.

Take it away, Elizabeth! 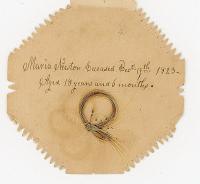 I was drawn at first to the lock of hair – blonde with brown highlights, gathered in a loop and sewn into a small paper token remembering Maria Newton, deceased at age eighteen in 1823. Maria was one of many to die from consumption (tuberculosis), a scourge for young women in the nineteenth century. This paper token and the lock of hair are the material remnants of a life cut short. The token announces that she died; her hair reminds us that she lived.

We don’t know who crafted this paper memorial. Highly ephemeral, these antebellum papercraft tokens were shared between friends and relatives, symbols of close bonds and reciprocal love. Cut from a single sheet of paper, Maria’s token takes the shape of three connected octagons, fringed on the edges. The three sections fold up like a tri-fold brochure, locked in place by a paper tab and slit. When folded, both exterior covers reveal images of flowers. On the interior are three inscriptions and the lock of hair. When closed, the token measures 2.5 inches side to side, not including the delicate, hand-cut fringe. 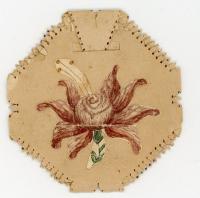 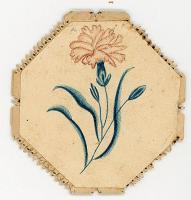 Google and Ancestry quickly reveal Maria’s lineage via the notoriety of her father, Deacon Israel Newton (1763-1856), one of the early settlers of Norwich, Vermont. Newton was a deacon of the church, an inventor (he is believed to have built the first pipe organ in Vermont), a Revolutionary War soldier, a representative to the general assembly, and a physician.(1) In 1786 he married Lucy Child (1763-1834), and they had nine children, Maria, born in 1804, was the last.

Maria Newton’s death, more than her life, is captured in records both public and private. The 1820 census logged her only as a checkmark in the category “Female, 10-15 years of age” and her death was duly recorded in Norwich vital records. The official record is cold, clinical: death from pulmonary consumption on December 19, 1823.The token is warm and bittersweet; Maria passed, an inscription notes, after living eighteen years and six months.

After her death, Maria was remembered likely by female hands engaging in a time-consuming, detailed handcraft that could only be undertaken by those with literacy, tools, and time. The meticulous cuts of the fringed edges and the identically shaped octagons speak to an antebellum appreciation of order; the flower embellishments reflect beauty and mirror the inscriptions within; the inscribed sentiments offer sincerity of emotion; the religious overtones a sign of hope for a heavenly reunion; and this tangible, physical item shared between those who loved her indicative of a cadre of family and friends.(2)
One can imagine the meditative act of cutting the fringe with tiny scissors and adding inked dots to decorate the tab closure. The covers invoke a floral language: a watercolor of a pink carnation signals “I’ll never forget you;” an image of a passion flower is a reminder of the crucifixion of Christ.(3)

Unfolded, the octagonal pages reveal a vertical triptych of sentiment.

The uppermost panel quotes a hymn, expressing sorrow over the loss of the young:

“So fades the fairest blooming flower,
Frail, smiling, solace of an hour,
So soon our transient comforts fly,
And pleasure only blooms to die.” (4)

The hymn reminds one how brief life on earth may be, a lesson known only too well to the Newtons who lost two sons young: nine-year-old James’ death was likely connected to a dysentery epidemic that raged in 1798; at nearly three years old Calvin, the family first-born, had died in 1789 from croup, his passing occurring thirty-four years and one day before to Maria’s death. As she sat vigil with her dying daughter, did Maria’s mother recall the anniversary—the consecutive death dates of her first and last born?(5)

From the topmost panel’s expression of God’s will, the middle octagon records a human response to fate with rhyming love and agony:

“Most precious lock! ‘Twas loved Maria’s hair –
Ah! Is this all the cruel grave could spare?”

And finally, in the third panel, the reality of death is evidenced with a precious remnant of Maria’s life, a small coil of her hair carefully attached. Multiple needle pricks in the paper suggest the challenge of securing slippery hair to the paper surface; perhaps several attempts were made, or perhaps over time, the coil loosened as ghost shadows on the middle panel suggest.

Maria was also remembered in the company of her family, her birth and death recorded in a Bible purchased by her sister Hannah in 1832 and later, as Hannah poignantly noted, gifted to her “only surviving sister,” Persis Newton Boardman, shortly before Hannah’s death. The inscription hints at, but elides, the losses subsequent to Maria’s passing: her sisters Lucy (1828) and Lodema (1831), and her mother (1834). Hannah herself died in 1838; Persis, who gave her own daughter (born 1827) the middle name Maria, died in 1840. Five of the Newton women had succumbed to consumption.(6)

Maria’s gravestone recorded her final illness—pulmonary consumption—the only gravestone to record a cause of death in Norwich’s Center Cemetery.(7) In Hannah’s Bible, we see that same clinical precision. Medical notes abound: James died from a “bowel complaint,” young Lucy Newton “had been deranged 21 months,” her mother Lucy “had been deranged 14 years and died of a consumption.” The promise of salvation softens the deaths: Lodema “had great consolation in her dying hour. Some of her dying words were ‘Come, Saviour, Come’.” The entry for Hannah, who died from dropsy and consumption, noted that “blessed are the dear who die in the Lord . . . for they rest from their labours and their works do follow them.” The specificity of Maria’s cause of death on her gravestone and in the Bible nods to Deacon Israel Newton’s work as the inventor of several widely known medicinal preparations including “Newton’s Bitters” and “Newton’s Pills,” that were sold across New England and into New York. Especially in the Bible records, we see a mix of faith in God and trust in science–when the latter failed, the former offered a salve. The medical details also signal the heartbreak that Newton could not save his daughters, his sons, or his wife. Indeed, Israel Newton outlived all but one of his family members.

At the end, much of Maria’s life remains lost to time, but the material record of her death offers a tiny biography of a young woman ensconced in a community and a family, where hymns were sung, and handcrafts made, and flowers bloomed. This chance survival, this bit of ephemera, pulls Maria, and young women like her, back from the margins and into the center where her life mattered and upon her death, she was sorely missed.

Notes
(1) “Deacon Israel Newton,” in M.E. Goddard and Henry V. Partridge, A History of Norwich, Vermont (Hanover, N.H.: The Dartmouth Press, 1905), 228, Google Books.
(2) On the aesthetic and cultural values of scrapbooks and similar works, see Jessica Helfand, Scrapbooks: An American History (New Haven: Yale University Press, 2009), 42.
(3) Catherine Boeckmann, “Flower Meanings: The Language of Flowers,” The Old Farmers Almanac, March 2, 2020, https://www.almanac.com/content/flower-meanings-language-flowers#. On the passion flower see Myles Stewart Irvine, “Passion flower Passiflora-History,” https://www.passionflow.co.uk/passion-flower-history/, accessed March 31, 2020..co.u
(4) The hymn, So Fades the Lovely, Blooming Flower, was composed by Anne Steele (1760). For the history of the composer and the hymn, see https://hymnary.org/text/so_fades_the_lovely_blooming_flower. Seeing the lyrics in this token would no doubt call to mind the sound of the hymn for early nineteenth-century readers, offering, in effect, a soundtrack to the text.
(5) The dysentery epidemic is noted in Goddard and Partridge, A History of Norwich, Vermont, 151-152. The authors also note an unusually high number of deaths in 1823 but do not identify a cause.
(6) Hannah Newton’s Bible is in the collection of the Norwich (Vermont) Historical Society. I am very grateful to Director Sarah Rooker for providing research assistance during a pandemic.
(7) See C. E. Smith, “Inscriptions from the Old Center Cemetery, Norwich, Vermont” (typescript, 1933), Internet Archive. 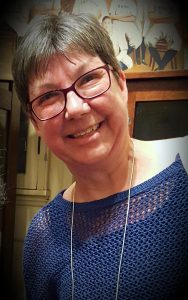 Elizabeth DeWolfe, Ph.D. is Professor of History and co-founder of the Women’s and Gender Studies Program at the University of New England (Biddeford, Maine) where she teaches courses in American women’s history, American culture, and archival research. Elizabeth is the author of several books and articles, including the award-winning books Shaking the Faith: Women, Family, and Mary Marshall Dyer’s Anti-Shaker Campaign, 1815-1867 (Palgrave Macmillan 2002) and The Murder of Mary Bean and Other Stories (Kent State 2007). At present she is working on several projects, including a quest to recover the stories behind locks and loops of hair pressed into scrapbooks and made into Victorian jewelry.